Foreign body penetrates into the gullet

There are world famous artists showcased among "artists of the gallery" ZAK. They are reflecting mythology and everyday life  - "Bottle-Top Painting"﻿ 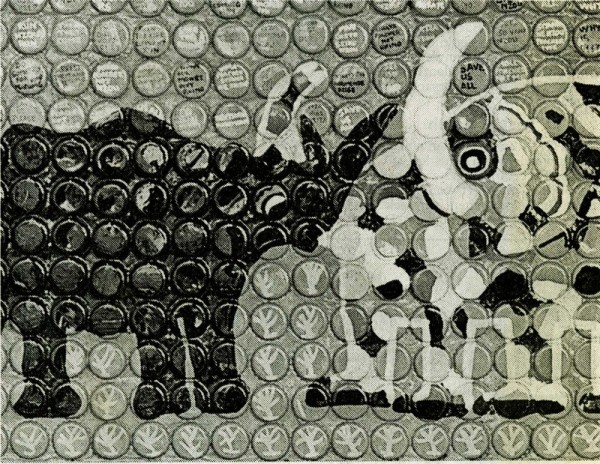 Millimeters thick is paint sticking out of the canvas. Zachariah Mbutha generously puts colour on it with a palette knife, which gives his paintings a strong sculptural quality. The brushwork with its expressive paint application is similar to Vincent van Gogh's art and In fact the Kenyan artist had his defining moment when he had found in a library a picture book about the famous Dutchman.﻿

Mbutha’s expressive art is part of the current exhibition "Artists of the Gallery" in John Hammond's Gallery ZAK (Zeitgenössische Afrikanische Kunst). One of his works in oil on cardboard is named "Eating corn". Again, there are the typical Mbutha faces with large eyes and full lips. "Very characteristic of African art," says Hammond, "is a reflection of everyday operations. The artists simply describe their daily routines." Banal is this only at first glance. The corn eating boy - so far so unexciting, but the corncob penetrates like a foreign body, like a gag into his throat; fearfully torn open is the pair of eyes. An ignoramus is who isn't scenting here subtle messages of a political nature.

The six artists in the "painters-part" of the exhibition are all autodidacts - we already reported about the "Tinga Tinga scholars" work group and the stone sculptures - but in the six years in which Hammond is showcasing their work at the gallery ZAK in the Königstraße, he knows only good things to tell: "People like Mbutha or Twins Seven Seven have become world famous" - "and really expensive," he adds not without explorers pride.

Twins Seven Seven, the Nigerian erotomaniac is here again represented. His solo show in the previous year in Fürth was sensational because of its open lustfulness. Ornamental and colourful, enigmatic narration and detail obsessed is this playful reflection of exuberant African Mythology in Twins Sevens Seven's art, whose mythical lizard-beings even after several minutes of observation may not reveal their secrets.

Making art in Africa: often means to make a virtue out of necessity, which means searching in the street for material. Or like Margaret Majo from Zimbabwe, whose is living next door to a Bottle cap manufacturer. She glues colonies of bottle caps on wood and paints over them; "Bottle-Top-Painting" is this original technique called. The funny note George Lilanga brings into play. The Tanzanian artist, gallery-goers in Fürth have seen at Hammond's „Aufbruch“ exhibition in the Euromed Clinic: one of Lilanga's art works was the poster for the exhibition. In the gallery ZAK he remains his peculiar carefree style faithful. Here bald-headed males and females are bustling in the storm of colours and are seemingly floating through space; a highly visible ironic break of stereotypes of African folklore.

Hammond's Art Agency is active ("we now want to go outside because to focus only on Fürth is unproductive"). Currently in Linz and Amsterdam and soon the highpoint will be an exhibition in a gallery in Kassel, to coincide with the upcoming Documenta in July 2002. Hammond: "I put a lot of hopes in Okwui Enwezor," the Nigerian curator of the world's most important art spectacle. "I'm excited to see how much space he will give to African art. She deserves it."