Hellish pain of the soul 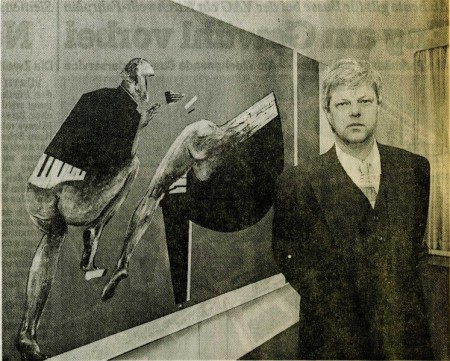 Manfred Hürlimann standing next to his painting, "My piano and me". Photo: Winckler

The composer sits at his piano like a sprinter in starting position. The face is cut and the chopped off hand is falling. Under the short black jacket pieces of claviatur peep out like a shirttail. The lower body is naked, as well as the female counterpart that lays sideward on top of the piano with the upper body mutated to a sheet of music. In the second part of the picture a thoughtful distanced observer looks at the bizarre scenario from the bottom corner.

In addition to his large acrylic paintings, the Swiss-born shows numerous drawings. He studied at the Academy of Fine Arts in Nuremberg under Günter Vogelsamer and lives since a long time in the Franconian metropolis. Superficially and of explicit sexual content, they are in truth sparse sketches of human deformation and destruction that causing dismay because they show the spiritual abyss.

The artistic outsider has long defied small-minded criticism of his provocative works that already led to the cancellation of a planned exhibition elsewhere. His topic for years, are the emotional wounds that cause people themselves, and which he images as outer mutilation. These are passions pictures, "incarnate emergencies of the soul," as it has once a critic of the Fürther Nachrichten pointed out.

None of the figures in Hürlimann's masterful drawings, which remind us at Francis Bacon, is undamaged. Chopped body parts, blasted face halves and thorns pierced bodies, make the shameless love act into a drastic act of suffering. The agony of waiting, which leads to solidification and immobility, Hürlimann makes vividly felt, when nailing the awaiting woman with pricked bones onto the wall.

The mutilations happen on white backgrounds and there is no escape for the viewer's eye. The opposite pole that keeps the main picture balanced is often a small stripe at the corner of the canvas, which repeats again formal elements of the main picture. The artist likes to divide his drawings also into two different picture parts, where the smaller one supplements the gruesome scenario with further ingredients or a figure, which isolates itself from the agonising scenario.

Only partially, as in the work "infusion", are the drawings also studies for Hürlimann's acrylic paintings that are always made in dense lurid colours. The most striking, shocking symbol of human suffering the artist has created with his presentation of "St Dorothy". The foldable large triptych shows the martyr hung on a meat hook as emaciated figure against golden background. Her body pierced by tools, roses and thorns. An icon, a moribund piece of meat, which Hürlimann during an art project actually hung in a butcher shop.A seemingly blasphemous act, which in such a bizarre environment must even more, be a monument to the tortured creature. Hürlimann is an admonisher, who dissects the horrors of the world with his own compassion; this also indicates his painting of Paul Verlaine. Like someone in desperation the poet leans his forehead on the edge of a table on which glasses and decanters filled with colourful liquids are placed. From above crashes the red cloth upholstered churches-chair onto the deep ground. As if because of the toxicity of the world the author of the most beautiful religious poetry of France has lost his faith.