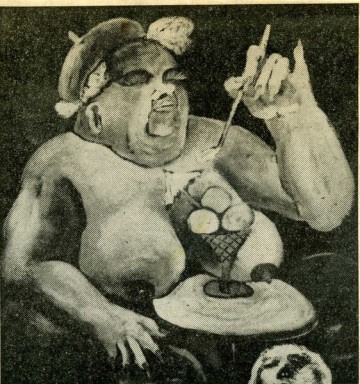 Exactly a year has gone by since Renate Höllerer has the last time presented her work in Fürth. A relatively long time, but in which the profiled artist was not sitting back and doing nothing. Productive she was not only during the painting session in the Künstlerhaus Hirschenstraße 28, although in the meantime this was her most successful one: With one work here created she was, until recently, in the Seventh International Biennial of Humour and Satire in Gabrovo Bulgaria represented.

When the Fürth-based painter tonight (19.30 clock) opens her new exhibition in her own „Galerie am Theater“, the visitor can look forward to some interesting news. These are particularly evident this time. Not the small format, caricaturing genre pictures are the ones that surprise, but huge oil paintings, in which for her pointed pen known satirist, dedicates herself to do genuine painting.

It's the crowd scenes, which through their ornamental formal aspect catch immediately the viewer’s eye. One of the paintings shows Renate Höllerer's artistic development particularly striking: the uniform stereotypically collection of carnival revellers. It's a couple of years ago since she excessively painted a smaller version of the same motif. Originally very gaudy, she revised it until the colour shades became a very subtle pastel. Now, again the strong contrast comes out. And then the large format, which emphasises the force of the image - an expression of growing self-consciousness.

As an artist for Renate Höllerer it is truly not easy, considering how little satirists are worth in the West German art scene. It is different in the neighbouring countries. A look in the Biennale catalogue shows that a painter of her type in this country swims in cold water. So seen is the perseverance with which Höllerer maintains and develops her craft purely impressive.

In correspondence to the exaggerated images of her human characters, the painter has developed an expressive language of colour. Unnatural shades, such as chrome yellow or garish green prevail. They gain plastic effect by being consistently worked out of the black background. Renate Höllerer achieves yet undreamed expressiveness, where she recalls her painting skills. With strict economy in the use of the funds, then images begin to live. For example, the averted female figure in a roughly outlined dark room or a horde of hellish changelings; from the red of their visages only the white teeth shine out. From the works by Renate Höllerer - satirical implemented - speaks out a deep discomfort in the affluent society. The people, who lack nothing and yet are never satisfied in their greed for new satisfactions and always-new lusts and desires, are for this painter a portent of disaster, towards the world as a whole is moving. This self-critical attitude labels her as a painter of our time. She hovers as an artist not in higher spheres but works in the here and now. The laughter, which her paintings cause, at closer look get stuck in the throat. 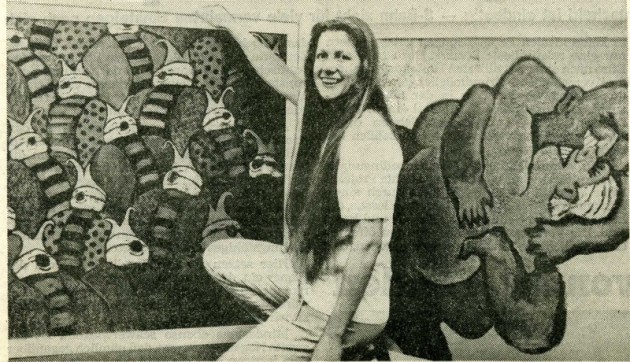 The artist - here in preparing her exhibition - in her new oil paintings ornamental imagery has again a powerful word. Photo: Meyer