The archaic power of colour 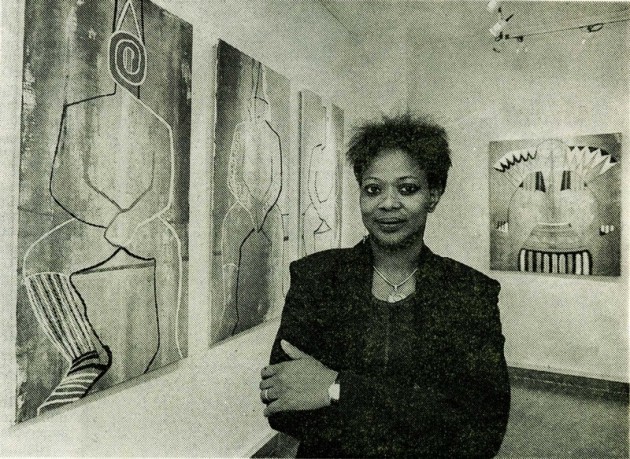 The artist Helen Efe Doghor-Hötter next to her bright coloured paintings at gallery ZAK. Photo: Winckler

Three suns side by side are sending rays towards the entrants of the Zak gallery (Königstraße 132). Rich tones yellow and red, a glow that erupts with archaic power from inside the pictures. The first impression is of a colour, which is overwelming, earthy and pure.

And almost just as if someone squints in the sun above West Africa, it takes a moment until the dazzled eyes can classify lines and strokes on the picture triptych by the Nigerian artist Helen Efe Doghor-Hötter. One recognises faces that turn out to be too alien, too abstract, too dehumanised as to get counted as faces. They are masks.

"Originally, the masks had purely ritual significance in Africa,"explains the Fürth-based doctor and Africa art connoisseur Bernd Kleine-Gunk. "They were cult objects, mostly made by men and had been worn by them to make contact with the ancestors." But here is a woman the creator, and her masks are obviously rather formalistic than ritualistic.

"A connection between African and European," recognises gallerist John Hammond in these works. Helen Efe Doghor-Hötter studied art, and this says Hammond is unusual in Africa because the African artists are mostly self-taught. The gallerist labels the vibrant picture triptych for example as something very un-African: three pictures that try to establish a connection or relation to each other.

"Very typical," on the other hand, is the abstraction itself. According to Kleine-Gunk there is no portrait painting in African art. From the beginning on certain characteristics are getting exaggerated. Particularly this reduction has influenced European art strongly, especially its influence on the Cubism as is known was enormous.

The artist, which originally comes out from a small village in Nigeria lives now in Cologne and is a border crosser of cultures. Fascinated by the cultural richness of African rites and tradition, nevertheless she has detached herself from her background: "My paintings are not magic items, but products of my own mind, by me inherited talent or talent of any kind whatsoever." The religious beliefs of other Africans she definitely respects, stresses the 37 year old.

Nevertheless, in her paintings and sculptures inheres fascination. In hard lines and angles emerge human faces, which appear familiar to us, but they aren’t. The mask, an abstract friend.