Obesity and the consequences

No looking back: New satire by Renate Höllerer in the Galerie am Theater

Renate Höllerer can’t leave the fatties alone, whether as a stout pair – he wearing a suit and bow tie, she naked – sitting in front of a three-story cake ("Wedding"), whether as a fat prostarity belly next to a cat that is just bursting at the seams ("Blood-sausage") or as a masked, busty pleasure seeker ("Dance party"). The Gallery owner, born in 1954 in Auerbach, Oberpfalz, illustrated with a quill the excess of "Coffee-gossip syndrome" and made it look ridiculous. 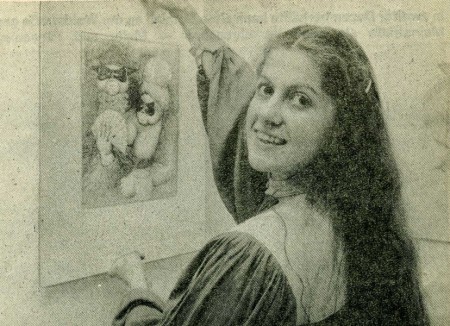 "Dance party": The gallery owner in front of one of her most recent pen and ink drawings. Photo: Meyer

The fact that not everyone is applauding her for this is obvious. Of course it does seem a little bit strange when in Nuremberg in a Noris-restaurant a showcased sequence of pictures is used by a group of suffragettes to boycott it, scenting hostility towards feminists; Renate Höllerer created for her October exhibition in her Galerie am Theater a picture for this dispute: "Emancipation total" shows a woman’s head behind barrs, her mouth is closed by a zipper (which can be opened up at any time to protest?).

But obesity and its consequences make up only a part of the spectrum from a sequence of consistently new work that can be seen at the Königstraße. In addition to the annual presentation of own pictures, the exhibition also puts a full stop behind three years working as gallery owner in Fürth.

After Renate Höllerer acquired in 1977 the design-diploma at the FH Gestaltung in Nuremberg and started in 1978 to study Graphic Design at the Academy of Fine Arts in Nuremberg, she also opened one year later together with John Hammond in a former dairy shop an art gallery and business with English antiques.

The October exhibition nevertheless didn’t look back even though the fat of the fatties continues to drip … (Why actually bother? In the Middle East, stoutness is still considered a thing of beauty).

Also in her prints (etching and dry point) Renate Höllerer impales in relish what she thinks is evil in everyday life in the Federal Republic in the 80s. Two big bellied policemen with big revolvers for example, with their cop-caps in South American stile, deeply pulled over their eyes, with a dove down at their feet in danger of being trampled on. Or the cacti-lover who is eagerly watering her prickly housemates at the window sill (Does she know where the flowers are gone?). And the surgeons armed with sharp-edged axes masked with mouth and nose protectors facing a defenceless statue. Title proposition: The humanisation of medicine. Finally, a child with a ball in front of a cellar hole in the backyard, next to a discarded toilet-bowl and a broken window glass. The title of this picture speaks for itself: "playground".

Jimmy and the palm fronds

The kaleidoscope of satirical drawings is rounded up by three portrais: The great Elvis with a guitar in place of his head, Marilyn Monroe as a half-opened up, wrinkled book and Jimmy Carter (with angle wings, palm fronds and halo in a rocking chair) under a threatening rain bow ("Jimmy under the rainbow").

It’s not only the fatties that Renate Höllerer dislikes. But they symbolise social discrepancies.