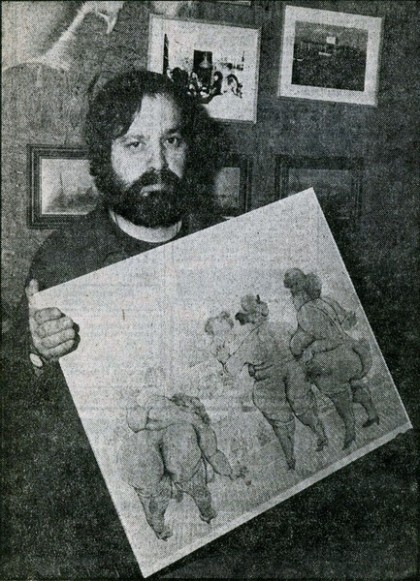 HAS NO LUCK WITH THE WOMEN: Greek pub owner Philippe is threatened by feminists, because he dared to hang paintings with naked women in his local. Photo: Roel Loopers

Nuremberg - women, nothing but naked women! Two pictures of the Nuremberg painter Renate Höllerer that the Greek pub owner Philippe exhibits in his restaurant in Johannis, gave him a hell of a lot of problems. The pictures of "Sunday I" and "Sunday II": cake munching, obese naked women. Reason enough for about 30 followers of the Nuremberg women's movement to go on strike and to avoid their favorite local.

"As soon as I had hung the pictures, it hailed protests", described the black-haired Greek pub owner his problem. "But what is the problem? For me, this is art and has nothing at all to do with the degradation of women".

Philippe'smentalworld collapsed. His usual stoic calm completely faded once the women phoned and threatened him. "So far nothing has happened", says the friend of the Muses. "MyPictures are still hanging on the wall". One thing however, the feminists have at least achieved: "My innocent taste in art has been greatly injured", the Greek complaines with an honest expression.