Satire in the foreground 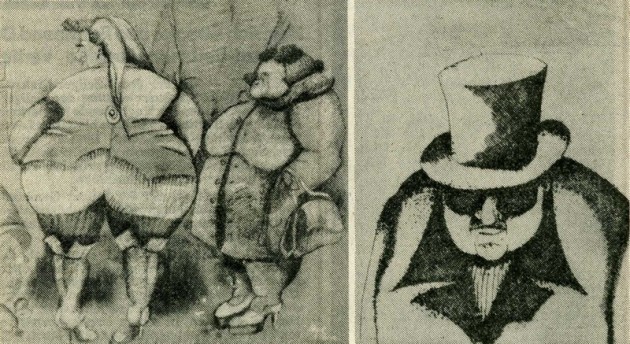 The element of satire is expressed in the images of the young artist. Photo: Meyer

An oversized, wide-eyed insect rides on a penny farthing against a seemingly violent storm - one of the nightmarish visions that Renate Höllerer created in a subtle manner in pen and ink.

Fantasy insects dominate her present exhibition at the "Galerie am Theater", ranging from almost fairy like beings to menacing monsters. Already kown to insiders are her earlier paintings, two obese ladies, who are putting all their "beauty" on display at a bus stop. The element of satire in the work of the young artist appears in the foreground here as well as in the etchings: profiles of obese dark men hiding behind big glasses with hats drawn deeply over their faces.

On the opposite wall of the small, elegant gallery space, the spectater meets them again. A bit bigger and even more repellent, and unsympathetic, skillfully highlighted through the use of mixed media (watercolour, pen and ink).

Renate Höllerer, who is a student at the Art Academy in Nuremberg, also tried painting in watercoluor, its content - as one would little else expect – remains mainly the insect. In blurred brush strokes and pastels they seem alongside the other pictures, rathermore playful than monstrous. Perhaps we have to expect even more sophisticated works using this technique at the "Galerie am Theater" in the future.